I can say “our” because I consider myself part of the team – the perpetual team of fans.  I have watched, rooted, cheered and cried with the ‘Boys for as long as I can remember.  Having been raised in Texas, it was not only part of my family’s tradition, I’m pretty sure we had classes about it in school.

I cannot speak of the other Superbowls with the Steelers for obvious reasons.  (True fans will understand…)

I’ve often wondered what it is about the Cowboys and football that I love so much.  I do not watch any other sport with such enjoyment, vigor and personal connection.  Is it just the history of always having watched them play on Sundays in the Fall with my family?  One of my early dates with my husband was watching the disappointing Cowboys vs. Lions  in  Today’s playoff game in January 1992.  I knew I could spend the rest of my life with this man once I discovered his blood ran as blue and silver as mine did.

But why does my blood run blue and silver?  To begin with, I am a girl.  This is not meant to be sexist but in general, football fans – especially those who know the difference between offsides and false start  – don’t have breasts.  Well, at least not ones that were meant to serve milk.  Women have only been granted full access to the game within my generation as far as being able to play at the younger level and media coverage.  Other than my mother, I have no close female role model for loving the game of football as much as I do.

Speaking of, there is an interesting study in and of itself.  My mother was born and raised in Pittsburgh, PA.  She and her best friend moved to Waco, Texas where she met and married my father in 1963.  It must be like a religion, because from all accounts, she converted to Cowboyism for my father and is about as die-hard of a fan as you’ll find.  (See attached photo of our family – it was her idea to wear the Cowboy shirts.)

But let me not digress too far from the point I was trying to discover.

I read somewhere, sometime that people love football because it instinctively reminds of our warrior days without the actual blood loss and death toll.  Again, being a peaceful, haiku-writing, anti-war featherweight who cannot understand why the referees let them fight so long in hockey, you would think that following golf or tennis would be more my style.

And yet, tennis makes my neck hurt and I believe golf would be much better served if the golfer is under constant threat of a tackle by a 6’5″, 375 pound d-lineman before whacking that tiny ball with his stick.  Don’t you?  At least that way it would help better me fight off the urge to nap than I am able to with the soft spoken tones of the golf announcer.

All of this is to say that I really, really, REALLY hope the Cowboys beat the snot out of the Steelers today.  I think they have the power and the might, even if Marion-the-Barbarian is out and D-Ware is playing with a hyper-extended left knee.  Romo has the eyes and the pinkie to connect with any one of our many receiving weapons – TO, Williams, Witten, Crayton, Austin, and I’m pretty sure T-Choice will surprise us all and have a great game. Ole Ben might need to get back on his motorcycle to avoid the pressure that is coming at him today and Polamalu will need to keep his hair out of the way if he wants any chance at covering our guys.

So, here’s to today’s game – raise your glass, melt that queso and get your popcorn ready — Cowboys 27, Pittsburgh 17… 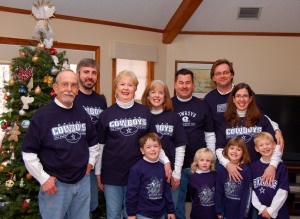 A Message to all Writers and Non-Writers